I recently heard a radio commentator remark on how, with the advancement of the Internet and the changing nature of news and publishing, we all have the ability and the duty to bring forth the truth about all things. I’ve often reflected on how the media and historians attempt to “oh, so cleverly” rewrite the facts and the truth about important events in our world.

The following historical anecdote was written more than ten years ago in an attempt to get it published in a nationally known magazine. I never got a response.

For some reason I thought about it today, and I realized that I never did get the chance to put this little history lesson out there. Well guess what? Thanks to modern technology and our ability to self-publish (i.e. blog), I’m going to “publish” this story right now.

I want this story to serve as a lesson for young folks about the nature of learning itself, and who is “deciding” history. I always preach against taking as gospel what “They” tell-teach-preach-drill into us every day. And by “They” I am referring to all the usual suspects: teachers, preachers, politicians, media schleps, and yes perhaps even people like me…parents.

The story of The Chaco War is not a case of history being rewritten, but rather a history that was never really told. At any rate, here is a history lesson that I guarantee none of you have ever heard. It happened in the Americas less than 80 years ago. More than 100,000 soldiers died senselessly, tragically, and partly fought over oil that, as it turned out, never materialized.

In reminiscing over the past century and millennium, it is little wonder we’re inundated with all manner of “looking back” stories in the media. I can say for myself that I have read stories about the most influential people, entertainers, politicians, and events of the 20th century.

The news value of these stories is minimal, but I must admit that they do make for a good read. Our human nature draws us to the outstanding, the exceptional, and the tragic.

However, if we are going to be fascinated by stories of the “greatests” and “mosts” of the 20th century, I insist on adding one more event for the record. I’ll call it “The Century’s Greatest Unnoticed Tragedy.” I learned of the disastrous and senseless Chaco War only because I spent two years in the region where it took place, in the deepest recesses of South America.

The story is tragic on several fronts. First, 100,000 soldiers died in the war. Second, the oil interests of international companies (yes, ones you have heard of) were contributing factors in the war. Third, the land for which the war was fought (below which supposedly lie vast oil fields) turned out devoid of the liquid gold after all. And a final reason why this story is so tragic, is that it took me until the age of 26 and traveling to Paraguay as a Peace Corps volunteer to even hear about this miserable war.

Let’s be honest. How many “Norteamericanos” have heard of The Chaco War? And yet, 100,000 Paraguayan and Bolivian lives were lost. Only 65 years ago. Right in our own backyard. Over oil. And with two well-known international oil companies suspiciously promoting the war. (Truly a “War for Oil” you never heard about!)

Perhaps the timing of this little war relegated it to “unnoticed” status. Indeed, the Chaco War would have to compete for space in the newspapers and history books with other 1930s’ headlines: The Great Depression, The New Deal, World War II, The Holocaust. Heaven forbid that too much should happen in one decade! It just wouldn’t fit in your typical school’s history curriculum. 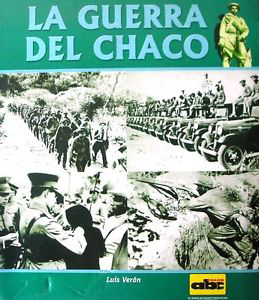 For what it’s worth now, here is the history lesson we never learned.

The Chaco War was fought from 1932 to 1935, between Paraguay and Bolivia, over a disputed region known as the Chaco Boreal. The Chaco, a virtually uninhabitable stretch of brush and woodlands, occupies approximately 100,000 square miles. Both countries claimed the territory as their own. This much is undisputed fact.

Bolivia, a landlocked nation, was anxious to gain a passage to the Atlantic for trade purposes. The Chaco would provide the most direct route to the ocean by way of its rivers. Yet Paraguayans, with a strong national pride, were not about to give up their land.

Adding to each nation’s desires was the speculative notion that the Chaco was rich in oil reserves. Standard Oil of the United States was already exploring for oil throughout Bolivia. The degree to which oil interests incited the war is open for debate, but various accounts suggest that it played a definite role in each country’s desire to win the Chaco.

Standard Oil is said to have prodded Bolivia into war, and Great Britain’s Royal Dutch Shell is believed to have incited Paraguay. Some versions even suggest that Standard Oil was financing Bolivia’s war efforts.

After three years and 100,000 lives lost, Paraguay finally won the war and the Chaco. It was a grand and patriotic, yet very costly, victory. Oh, did I mention that the Chaco oil fields never materialized?

When considering that so many died, so recently, and with possible oil companies’ involvement, you would think this debacle would not so easily escape our notice. You would think…

I have always believed that we favor events, historical or otherwise, based on “whom” the affected peoples are. After all, how many know where Paraguay, Bolivia, and especially “The Chaco” even are? In this vein, I find it sadly humorous that we rarely hear about the millions of Chinese or Cambodians murdered and starved by their own governments during the 20th century. But more common to our knowledge is what the German Nazis and Soviet Communists did in their own spheres of influence. And yet all four powers committed their deeds in the same century.

Why is that? We do we know some histories better than others? Could it really be as frighteningly simple as schools, textbook publishers, or State Departments of Education making the decisions as to which histories get taught and which ones don’t? Who are these people making such momentous decisions?

To my thinking, selective coverage of events by the media and history gurus equals selective learning, which ultimately equals selective knowledge. A very disturbing concept to say the least. For various reasons, we pick and choose which “histories” are worth remembering. Unfortunately, some histories, like the Chaco War, get left behind. It makes me uneasy to consider the other horrible and senseless tragedies that have occurred in this world that I have never and will never learn about. If a full listing of “The World’s Greatest Unnoticed Tragedies” could be compiled, it would probably embarrass us to learn of historic events that did indeed go virtually unnoticed.

And it saddens me to think that my tale of the Chaco War, which claimed a “mere” 100,000 lives, might even go unnoticed on the list of unnoticed tragedies.

Things on my mind…